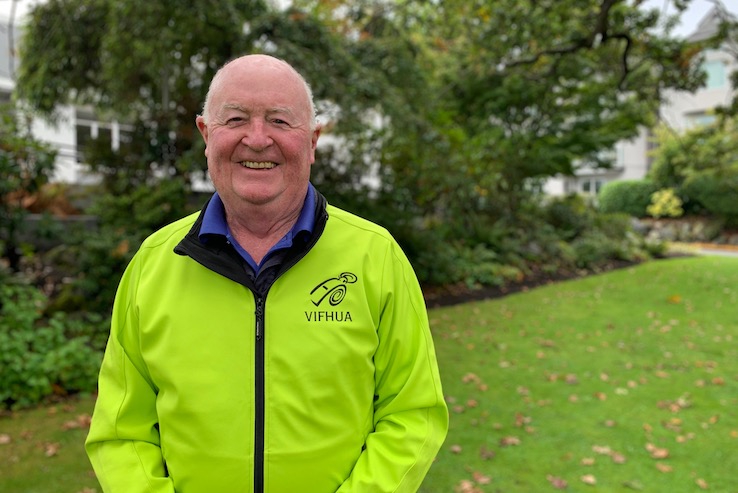 While 2020 marks an unprecedented year with seemingly little in the island hockey world to celebrate, there is one bright spot worth highlighting. Long-time hockey contributor and umpire David Auld has announced his retirement.

“It is my great honour to congratulate David on his retirement from umpiring,” said Denise McGeachy, past president of VILFHA (ladies league) and current president VIFHUA (umpire’s association). “His dedication to our game has few equals. David always brought a positive attitude to each game and treated all players respect. The umpiring community is richer for his contribution, as an umpire and mentor.

“Apart from the umpiring, David is one of the sweetest, kindest people I’ve ever known. David always had a smile on his face at the beginning – and more importantly, at the end of each game no matter how difficult or bad the weather. To me, this is his greatest legacy to our community – his positivity.”

Auld has been umpiring in Victoria since his arrival from Scotland in 1969 and was certified as high as a Canadian Regional level official. A familiar, smiling face on the field, David is well known for his time spent officiating at the high school, men’s league and, most notably, women’s league games. In 2008, David was named a VILFHA Honorary Member, awarded to only 19 individuals since 1958, for their dedication, service and commitment to building the ladies league.

It was only by chance that Auld happened upon the sport of field hockey, which came to be the good fortune for Field Hockey Victoria. While attending the Jordanhill College of Education, in Scotland, Auld intended to pursue the sport of rugby, while the Director of Education at the college had another suggestion.

“I was told, ‘Auld why don’t you try the sissy’s game’ – grass hockey, as it was called then, is what I picked up and I never looked back,” described Auld about how he fell in to the sport. “It was purely by accident. I just loved the game and I climbed the rank enough to play for a first division team at Jordanhill and eventually a West of Scotland team.”

In 1966, Auld relocated to Canada and Vancouver Island, accepting a two-year teaching contract in Shawnigan Lake at the Cliffside Preparatory School, while his wife, Edna, worked as a nurse in Duncan. There, Auld also played field hockey for two years with the men’s team at Shawnigan Lake School in a league that included the Tigers, UVic and an Oak Bay team.

“At the end of those games at Windsor Park there was always a game right after and people figured that since I was a PE teacher I would know all the rules and I should umpire,” said Auld about how the whistle was first placed in his hand. “I had no qualifications but I was given a whistle and just did it. Whenever the umpire certification process started I did that and I got as far as Regional.”

In the 1980’s, Auld was also on the block to contend for his Canadian rank but during his field rating got injured and was unable to complete the game only later to find out that his age would likely prevent him from being selected for any Canadian-level matches anyway.

“I just went for [the Canadian rating] to improve but I was 46 and they had just dropped the age limits,” added Auld, who then decided to just stick with his regional rating.

Auld did relocate to Victoria with his wife, Edna, in 1969 and was the head of PE at Glenlyon Norfolk School. Edna and David had three children – Fiona Auld, Ian Auld and Caty Petan. Both Fiona and Caty played field hockey at Oak Bay Secondary and competed and won, in different years, at the provincial championships.

Auld’s umpiring career included doing the local men’s and women’s leagues, the premier men, high school girls and B.C. provincial championships. Auld bowed out of men’s league about 15 years ago and spent his last five years of umpiring dedicated to the third division VILFHA women’s league, the players of which he credits as the best to umpire.

Auld credits island officials Chris Wilson, Denise McGeachy, Gillian Batey, Alison Sweeten, Steve Stern and Tyler Klenk for their wisdom, guidance and inspiration over the years. Legendary field hockey contributors Jenny John and Pat Hall were also highlighted as being instrumental in support and laying the foundation for his pathway as an umpire.

“I’ve always admired his love of the game and his love of learning to improve his umpiring,” highlighted Victoria-based Chris Wilson, a 15-year FIH International certified umpire. “I remember almost not a weekend would go by that he didn’t have an umpiring question for me.”

“We had some great conversation about umpiring, rules and style. Also, watching him and seeing him enjoying umpiring a game is always a highlight. He’s been a long-standing member of the Victoria hockey community and has dedicated decades to the betterment of our sport.”

Auld continued as a player with the Castaways men’s team, made up largely of retired rugby players, from 1972-75 and when the team folded he played a large part in forming the Oak Bay men’s team.

Players that were umpired by Auld would not be able to argue the fact that he carried his love of the game on to the pitch rain or shine. His calm demeanor, jolly laugh and fair approach to the sport was always appreciated, while his desire to always pursue growth in his ability was an inspiration to all who remain complacent.

Q: The hardest rule for you to implement in your time:

David: I’ve never really agreed or understood this one. If you raise the ball in field play it’s dangerous or you are subject to danger but with a shot of goal there’s no danger. Just because there’s a shot on goal there’s no danger? If someone flicks it or scoops it you see that coming but this rule is just so hard to understand.

Q: Most gratifying thing to call or moment on the field:

David: Feeling that I did a good job on the field as an umpire. Usually I have a good feel but the players congratulate you. I remember umpiring the twins, Clive and Giles Wheatley, in a first division game and their sister, Harriet, came up to me and said, “Mr. Auld that was the best game I have ever seen umpired.” And I never expected that and that was a long, long time ago and I was surprised and never forgot.

Q: The most memorable card you have ever given:

I have very few red cards in my career, never in the women’s league, only in the men’s league. I did give a player a red card for language, poor behaviour, bad sportsmanship and as he walked off the field he was still sort of threatening me but I never forgot it. I’ve also given a couple to a few visiting Vancouver team players who were on the Canadian national team and they were upset about the call and said, “why don’t you just give me a red card?” so I did.

David: Well one time at half time I went over to my bag and took off my gloves and had to blow my nose and then when we were ready to start the game my colleague started time. Play went on and I went to blow my whistle and realized I had forgot it on the other side of the field in my bag. I had to wave my hands in the air and make a ‘T’ and it was just a major brain lapse.

That wasn’t my most embarrassing moment, though. I can’t remember the two teams but I was doing the right thing and seeing the attack coming towards me. I curled in to the near post and this one lady was running at the ball and I could feel she was over-running the ball. I thought, ‘she is going to charge in to me’ and I prepared myself. She bowled me right over and ended up on top of me and I ended up with both hands on her chest. My partner, Alison Sweeten, will remember this story because I was so embarrassed.

Q: Some advice you have for the next generation of umpires:

David: Be prepared that you are going to make mistakes and you need to learn from them. Watch top class games with top class umpires.

Q: What would you say to umpires who are maybe just happy staying where they are in umpiring?

David: Field Hockey BC used to send out a questionnaire about your goals and your aims and ask you what you inspire to be as an umpire. And after I couldn’t get my Canadian rating I said that I just wanted to be the best Regional umpire that I could be.

Q: Outside of being on the field, what do you think umpiring has taught you?

Q: Looking back at the many weekends you spent at the field, what do you think you would have been doing if you weren’t umpiring?

David: Edna and I would have been going away on weekend trips and maybe some cycling trips. We used to cycle up island, to the gulf islands. We would have been doing more of that. Edna was always supportive of me umpiring. I used to play cricket and a game would be 6 hours and she would come watch with the kids even though she didn’t know the first thing about cricket.

Q: What was your greatest challenge umpiring?

David: My greatest challenge was when I was asked to do two Canada vs USA men’s games in Victoria in the 1980s. Canada and the USA were up at UVic on a two-week training camp so they had scrimmage games every other day and I was asked to umpire. I umpired with a USA national umpire and I warned him that I might be out of my depth but he came up to me afterwards and said, “I don’t know what you’re worried about, you’re doing fine.”

Q. Best advice given to you:

David: Jenny John once said at a clinic, “never assume that when you walk on the field that players are going to foul. You must always go on to the field and assume that they are going to play the game properly.” I thought that was really good advice and that was 25 or 30 years ago.

Q: Highlight tournaments, games or memories for you?

David: Of course the Canada vs USA games. Also, the Bridgman Cup is such a great tournament and I have been to a few of the B.C. High School championships and I’ve enjoyed that. I’ve also umpired in the Vancouver men’s league a few times.

—
by Ali Baggott, for VILFHA