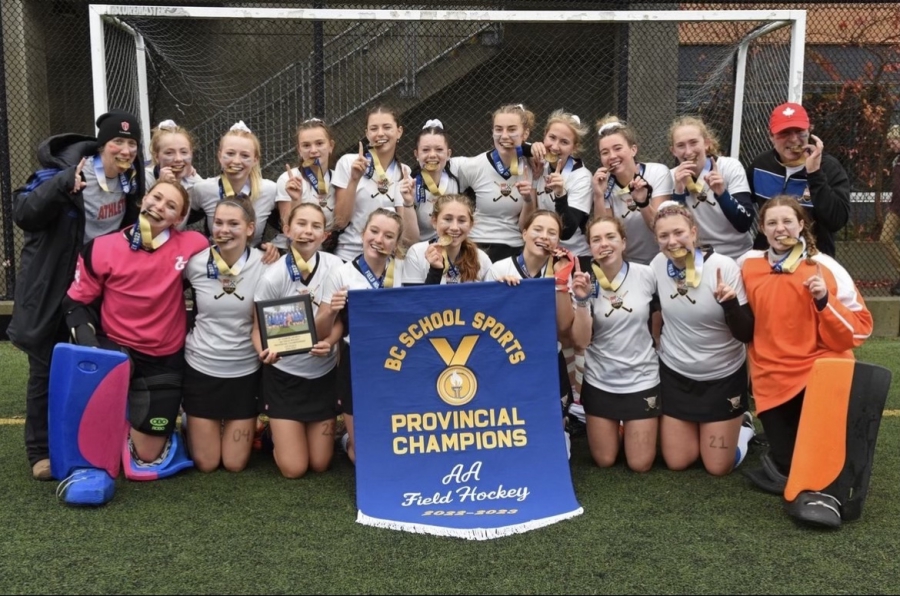 The St. Michael’s University School senior girls field hockey team capped off a banner season with an exciting first-placed finish finish at the AA BC championships, hosted by SMUS at UVic from November 2-4. This is the first time since the 1990s that the the SMUS senior girls team brought home the provincial title.

In the provincial championship, there were comfortable wins against Keremeos, Southridge and York House in pool play, followed by a hard-fought quarter final win, 2-0, over Windsor with goals from Amanda Adams (Lynx) and Mia Muller (Lynx). This set up a repeat match against York House, who upset Crofton in another quarter-final. The SMUS team decisively beat York House 3-0 in the semifinal with two penalty strokes finished by Eva Cuddihy and an empty net goal for Kendyll Adams. This was sweet revenge against York House who had beaten SMUS the previous year.

The final against Little Flower Academy was a game of two halves with SMUS dominating in the first half, but not finishing many attacks, and LFA coming back strongly in the second half and opening the scoring with a well-taken penalty corner goal. With time almost running out, a breakaway into the LFA end saw Eva Cuddihy score over the goalie with 90 seconds remaining. With the game tied at 1-1 each at the end of regular time, the always intense shootout was the deciding factor. Fortunately for SMUS, the calm finishes by Amanda Adams, Rebecca Stone and Allegra Nelson, plus three saves out of five from SMUS goalie Talia Pike, gave SMUS the 3-2 shootout victory. The large crowd in the stands and people watching the game on the livestream were relieved and excited!

The SMUS field hockey team has had its most successful season in the school’s history, winning 5 out of 6 available trophies (the 6th was a shootout loss to Crofton in the final of the Bridgman Cup), and showcasing high class field hockey, but also excellent camaraderie and sportsmanship as well. The tour to Germany in August helped create the foundations for the current amazing successful high school season, and the young athletes should be applauded for all their accomplishments this season. Congratulations to SMUS coaches Dave Kerr (Rebels) and Stef Sloboda.