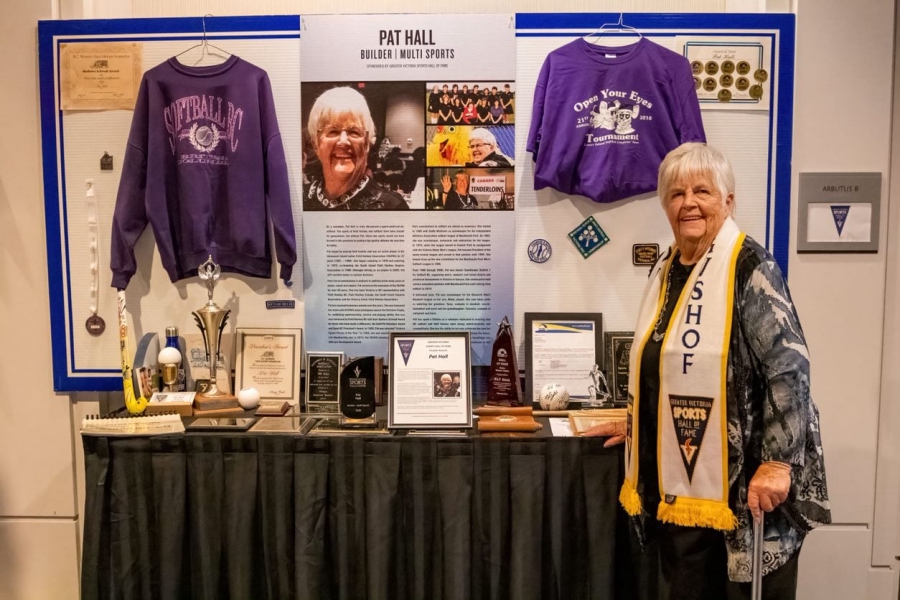 While long overdue, the Vancouver Island Ladies Field Hockey Association (VILFHA) are excited to host a celebration event and fundraiser in honour of long-time field hockey builder Patricia Hall who was inducted in to the Greater Victoria Sports Hall of Fame in October 2021. VILFHA is pleased to host this celebratory event and tickets will be sold by donation (min. $10 per person).

Note: one person can purchase multiple tickets on the above registration link. That person will be the main contact from the event organizers.

All ticket sale funds from this event support the Pat Hall Officials Development Award. This award is designed to promote the development of Vancouver Island umpires and technical officials. An award of up to $500 will be allocated each year to successful applicants. In order to be eligible for this award, applicants must be a member in good standing with Field Hockey BC and an active official within National, Provincial or Club based programming.

On May 8, 2021 the Board of the Greater Victoria Sports Hall of Fame (GVSHoF) announced the names of the athletes and builders who will be inducted into the Hall of Fame in 2020. She was finally honoured in person in October 2021.

She has received numerous awards over the years including Victoria Sports Person of the Year, Sport BC President’s Award, VILFHA Life Membership and, in 2013, the VILFA introduced the Pat Hall Officials Development Award.
Her contributions to Softball are almost as numerous. She became involved with the Stuffy McGinnis Softball League in 1960 and served as President from 1975-1993. From 1987 to 1999, Pat was Softball BC Senior District Coordinator and in 1996, led the restructuring of junior softball into three levels.”

—
Please e-transfer your registration funds to vilfhafees@gmail.com with the Primary Registrant’s name in the notes section.

Please RSVP with this form and payment by September 10, 2022.
Details will be sent to confirmed attendees.