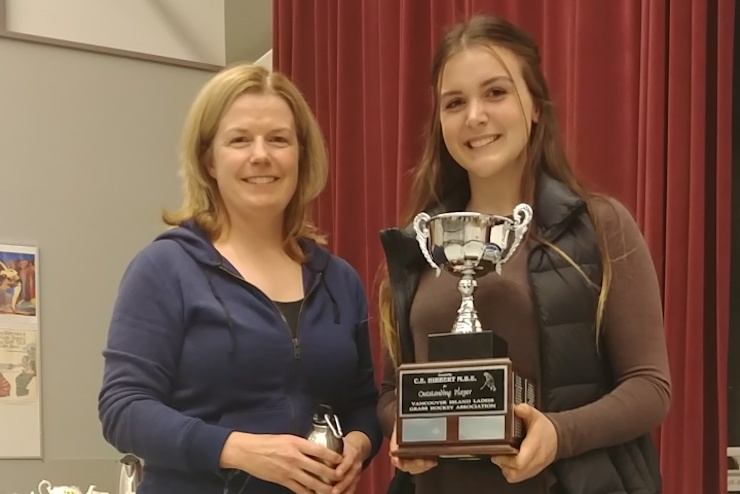 On April 9 the Vancouver Island Ladies Field Hockey Association (VILFHA) awarded the league trophies, major awards and all-star team acknowledgements. Lynx 1 midfielder and Mount Douglas Secondary captain Stefanie Sajko was named the league’s top player and ultimately the Hibbert Trophy winner. Flickers stand out Chloe Langkammer was the top junior player earning the Trelawney Shield, while Cowichan’s Teresa Gregus was presented the Christine Trophy for her contributions to the league and sport. Lynx 2 forward and developing umpire Nora Struchtrup was presented the Foley Shield for her umpire performances this season.

The Division MVPs were awarded to former UVic Vike and Lambrick Park Secondary midfielder Kyla Kirby, who led Lynx 1 to a Division 1 league and playoff title this season. In Division 2, long-time midfielder Shannon Petrovic was selected as the division MVP as her consistency, near-flawless attendance and strong performance helped the Sailors earn both league and playoff champion honours. In Division 3, Theresa Kennedy was named MVP for her standout goalkeeping performances this season.

Lynx 1 were the playoff and league winners for Division 1, while the Sailors also completed the sweep in Division 2. The Pirates won the league title for Division 3 but after losing out in a semifinal shootout, gave room for a different playoff champion. The Kestrels defeated their fellow club team the Stellers in the final for Division 3 to hoist the playoff trophy.