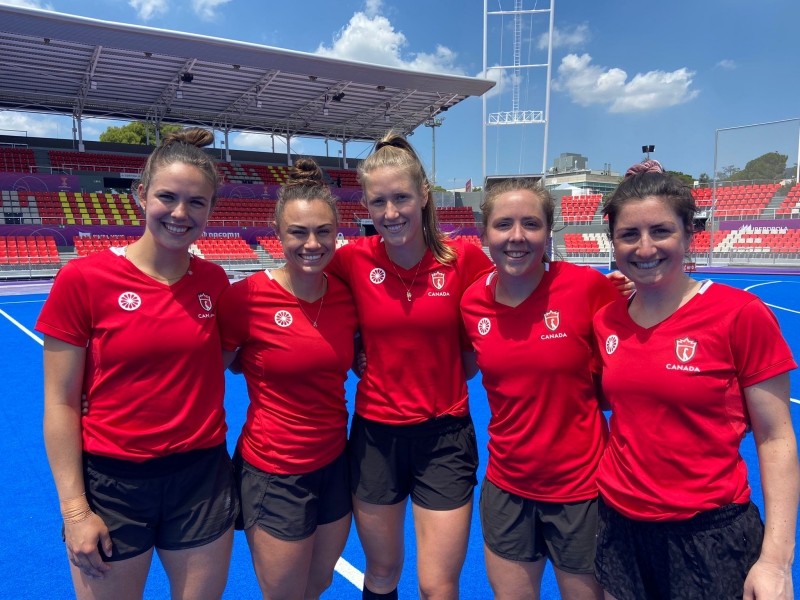 Amidst the excitement and pride of the Canadian WolfPack qualifying for the FIH World Cup for the first time since 1994, there’s a small pocket in Canada that also sheds a few more tears of pride. Among the 18-player roster are five names that lean heavily on their roots from Vancouver Island. Veterans Maddie Secco and Kathleen Leahy hail from Victoria along side new staples Lexi De Armond and Anna Mollenhauer. Duncan product Sara Goodman is also a bright star for the fresh-faced Canadian side, led by head coach Rob Short, a former University of Victoria Vike and iconic national team men’s player.

While mathematics equates that Vancouver Island players make up only 28 per cent of the World Cup roster for Canada, that’s a fair contribution given the spread of Canadian talent in the country and, the strength of talent across British Columbia. Duncan and Victoria have been heavy national team production hubs thinking back to the talents of Olympians Shelley Andrews, Sara Ballantyne Brant, Nancy Mollenhauer (Charlton), Deb Whitten and from the 2000s era Rushton sisters Andrea and Katie.

The history of island hockey runs deep through all players that move on to the top levels and that is still a strong sentiment in current national team players.

“To me the field hockey community, not only in Victoria, but across the whole island, is very tightknit and it’s a very special community to be a part of,” described Anna Mollenhauer, a three-time U SPORTS National Champion with the UVic Vikes. “I honestly think it’s hard to fully articulate how special the island field hockey community is to me, but I can confidently say that I would not be the person or player that I am today if it weren’t for the Victoria field hockey community and I will forever be beyond grateful for the coaches that I had and continue to learn from, my teammates and lifelong friends and the next generation of island players who inspire me and reignite my love for the game.”

For Secco, on the eve of her 150th international for Canada, a presence at the World Cup is extra special.

“After a strong performance in Chile (at the qualifying event), the team earned its spot in the World Cup,” said Secco. “Our group is taking confidence out of that and viewing this tournament as an opportunity. Coming into this event as underdogs, means the rest of the world isn’t expecting us to succeed. It creates space for us to play freely and deflect pressure. We are all so honoured to be here and can’t wait to compete with the best.”

Secco, who is one of the few island players who took her post-secondary play to the USA, competing for Stanford University, also represented Canada at the junior level and is a member of the Oak Bay High School Hall of Fame.

Leahy, like Secco, was also inducted in to the Oak Bay High School Hall of Fame. Both were stand out soccer and field hockey players. Leahy attributes a lot of her success in field hockey to the community. The former UVic Vikes player was a high-level soccer athlete up until grade 12 before really turning to focus on field hockey. She battled through multiple ACL knee injuries through her post-secondary and national team career and is proudly heading in to her next game with 73 caps.

“I also think the community is really great at both finding talent and retaining it in the sport because of the wonderful leaders we have within the sport on the island,” added Leahy. “There are a number of people who have dedicated their whole lives to growing the sport, they’ve put their heart and soul into it and the fact that more than 28% of the first Women’s World Cup team in 28 years is made up of island players proves that their efforts have been successful! We could not be more thankful for the development available on the island.”

In order for that cycle to continue, it has been evident that those players that make it to the university, college or national team level always cycle back in to the fold. It’s pivotal for the island’s production line.

“Most successful athletes at this level were multisport athletes, you learn so much for scenarios in other sports,” said Leahy on advice for the next wave. Field hockey is technical, but it’s also very tactical and being a smart player can take you very far. Finding balance in both your athletic life and your personal life is important to being a happy person and being able to maintain a competitive lifestyle without burning out. It’s important to give back. You owe your career to the people who taught you, supported you, and believed in you. Now it’s your turn to turn around and do the same for the next generation. It doesn’t matter in what capacity, just get involved somehow, stay connected to the community and show your gratitude for everything they have given you.

Mollenhauer, also a talented multi-sport athlete, also attributes her success to work ethic and belief, advising: “As far back as I can remember when people asked me what I wanted to do in life I would tell them I want to go to the Olympics or World Cup or a multi-sport games. I would tell my younger self to keep chasing your dreams and don’t let anyone or anything hold you back…In simplest terms I remind myself to make the little girl inside of you proud, not only because I knew people looked at her and questioned her dreams and tried to convince her otherwise, but mostly because she fell in love with a game, for the fun of it, and that is why I continue to play today, for her.”

Those dreams are already coming true for the 22-year-old who by next month will have both a World Cup and a Commonwealth Games to add to her already impressive resume.

In Duncan, Goodman hails from a strong pocket of talent, honed by a deep and rich history at mid-island high schools like Cowichan Secondary, Brentwood High School and Frances Kelsey. Goodman, whose younger sister, Jenna, is already in the pipeline as part of the Junior National team and UBC Thunderbirds, also knows the pathway isn’t always as clear cut as one might hope.

“I would just remind young athletes that everyone develops at their own pace,” heeded Goodman. “Have patience with yourself and continue to put in the hard work because it will pay off. As cliche as it is, try and stay present, enjoy every moment, and fully immerse yourself into every opportunity you have to get better.”

There’s no shortage of patience as Canada’s 28-year payoff to be at a World Cup is finally here. Despite pool-play losses to Spain (4-1) and Korea (3-2) already in the bag, Canada has a lot to say about how they got to the World Cup stage. Canada’s next match up is against the powerhouse Argentina Leonas, who recently were crowned the 2022 FIH Pro League champions, but if there’s one thing Canada can be counted on, it’s getting up for a game against their Pan American foes.

Hockey on the island continues to grow as former Vancouver Island products Andi Shannon and Giles Wheatley head fabulous youth programs in Port Alberni, while hockey in the Comox Valley and Nanaimo still take shape in the form of Master’s women’s teams. The strength of Duncan and Victoria hockey continues be the lifeline for island hockey and, as it seems, also for Team Canada.

Cheer on island players Leahy, Secco, de Armond, Goodman and Mollenhauer as they play Argentina in their final pool-play game of the World Cup on Thursday, July 7 at 9:00 am Pacific / 12:00 pm Eastern on watch.hockey (app or website).