Now Accepting Nominations for In Her Footsteps 2013! 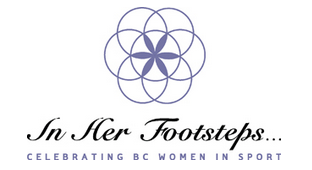 June 17, 2013— ProMOTION Plus is pleased to announce that we are now accepting nominations for In Her Footsteps… 2013.

In Her Footsteps is an annual recognition program. It honours women who are or have been athletes, coaches, officials, judges, pioneers or advocates who have made significant contributions to girls and women in sport. These women have created opportunities for participation in sport and recreation in British Columbia, inspiring others through their own athletic achievement, passion and dedication. Their stories are featured in the In Her Footsteps exhibit at the BC Sports Hall of Fame.
Do you know a Woman We Should Know?

We are CELEBRATING BC WOMEN IN SPORT and are seeking nomination for inclusion in the In Her Footsteps… exhibit at the BC Sports Hall of Fame. Potential candidates are women who have brought about significant positive change in the world of sport in BC, through their actions, passions and commitment to sport. This may include someone who has achieved a high standard of athletic excellence or increased involvement opportunities for girls and women in sport or physical activity in British Columbia.