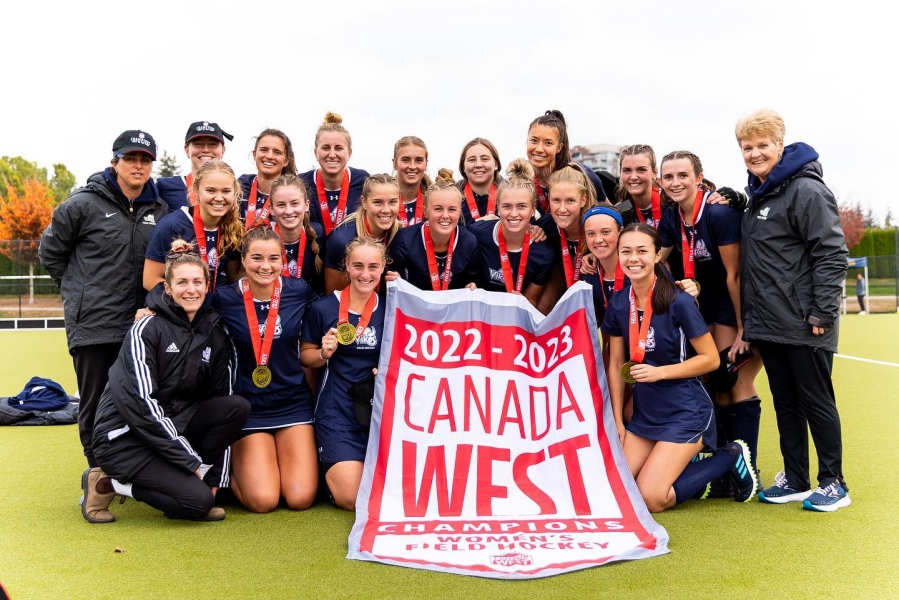 For the third time in her Canada West career, Victoria’s Anna Mollenhauer has been named the conference’s Field Hockey Player of the Year. Mollenhauer is just one of many who call Vancouver Island home that were highlighted in Canada West awards this weekend. University of Calgary Dino Izzy Green, from Cowichan, was named Rookie of the Year and Vikes bench boss Lynne Beecroft was named Coach of the Year. Six of the 11 conference all-stars were from Vancouver Island including Green, and Vikes players Mollenhauer, Maeve Connorton (Victoria), Libby Hogg (Victoria), Chloe Langkammer (Duncan) and Nora Struchtrup (Victoria).

This conference award winners were presented after the Victoria Vikes secured their fourth straight conference title (23rd overall). They will now move on to face the OUA Champion in a best-of-three series for the 2022 U SPORTS title on Nov. 3-7 in Victoria. The Vikes will host as the Canada West champion.

PLAYER OF THE YEAR: Anna Mollenhauer

Anna Mollenhauer, a duel threat, has loomed larger than life on the field this year. The fifth-year defender helped guide the Vikes to an unbeaten 7-0-1 record in 2022, recording eight goals and helping the Vikes’ defence to five shutouts. A versatile asset on the field, Mollenhauer was effective at stopping opponents in their circle while creating scoring chances of her own, setting her team up for success.

The Victoria Vike also won the award in 2018 and 2021, and has helped guide her team to four conference championship titles in her time with the school. In addition, the Victoria, B.C. native was selected as the 2021 U SPORTS Player of the Year, 2019 U SPORTS national championship MVP and is a three-time All-Canadian and Top 8 Academic All-Canadian.

Anna continues to showcase her international experience, composure and skills for the Vikes as we go for a fourth-straight U SPORTS National title. As a defender Anna is an outstanding distributor and leader from the back but give her an inch and she will take a mile. Not afraid to go on attack and with no shortage of skills to get her there, Anna has scored 8 regular season goals (field and penalty corner goals) and helped the Vikes go undefeated this season. Anna is all a co-captain and a humble, considerate and caring team member and leader.

ROOKIE OF THE YEAR: Isabella Green

Green came to the Calgary Dinos hot off a successful individual performance at the U18 FHC National Championship where she co-captained a Vancouver Island-based BC team. Her tireless work ethic, efficiency in both directions on the pitch and her leadership shown in the summer transitioned flawlessly to her first-year season with the Dinos.

Usually an attacker or midfielder, Green slid in to one of the most challenging defensive positions on the pitch, at left defence. Tasked with managing opponent’s strongest and often fastest strikers who are attacking on their forehand, Green didn’t seem phased. Starting and playing nearly every minute of every game was a testament to Green’s strength and fitness heading in to the Canada West season and her fearless, gritty nature made her a key cog to the Dinos defence.

Green rivalled with the best, tackling top players, many who have been through the recent Canadian Junior World Cup and NextGEN cycles, with full confidence. A demeanour on the pitch that carried maturity and experience is something any coach would value for a rookie stepping in to the backline and that was what Green delivered.

COACH OF THE YEAR: Lynne Beecroft

In her time with UVic, Beecroft has guided the Vikes to 34 appearances at the U SPORTS national championships, hoisting 14 McCrae Cups. Beecroft’s teams have also captured 16 Canada West Championships. It is only fitting that in her 39th season as head coach of the Vikes Lynne Beecroft or “Buzz” as we call her would win Coach of the Year. Her creative and compassionate approach to bringing the team together is no doubt the reason why women’s field hockey boasts the most number of Canadian national titles among all @uvicvikes sports. Another undefeated season, a potential fourth-straight and 15th overall U SPORTS title (all under Buzz’s reign) and helping hoist the program’s 21st Canada West title are the team accolades that likely win her this award but to the team and alumni, it is the details that those outside the program don’t see that really make her worthy of this accolade. From team themes, to creative gifts, to her heart and kindness to keep the team active and contributing members of the community – Buzz is one of a kind.