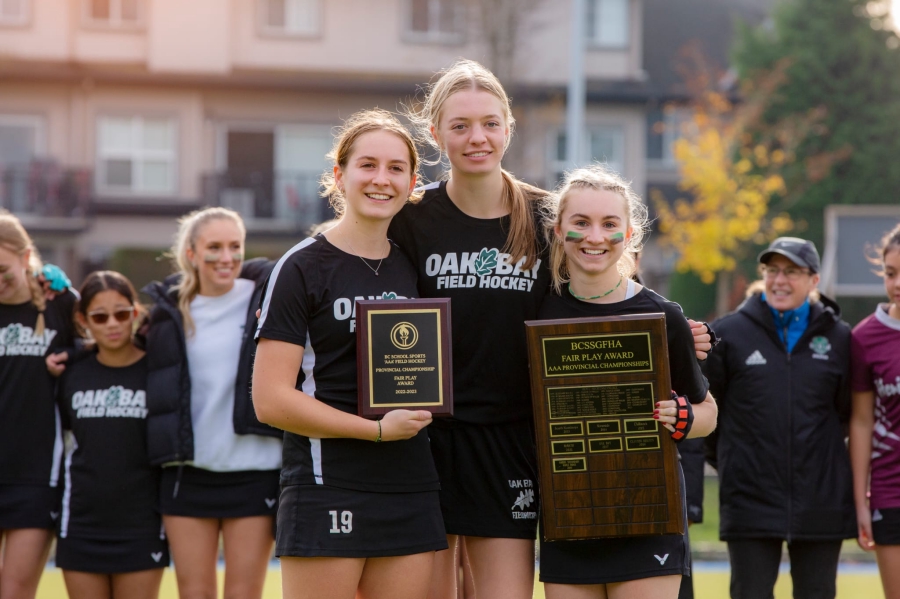 The Oak Bay senior girls field hockey team won the silver medal at the recent BC AAA Championships on Nov. 11 in Surrey, B.C. The team faced off with the perennial powerhouse from the North Shore, the Handsworth Royals and after a 0-0 tie, lost out in a shootout. It was an outstanding performance for the young team who graduate several key players last season. Oak Bay dominated the second half but a 0-0 scoreline was indicative of the play. It was familiar territory as Oak Bay beat Handworth in a shootout just the season before at the same championships.

After five rounds of shoot outs, the teams were again tied at 2-2, with goals by Maia Lawrence and Irene Morillas, and the outstanding goalkeeping of Anais Chace. In the sudden death shoot out, Handsworth took the title. Fellow Vancouver Island competitotrs, Cowichan Secondary, were out in full force to support Oak Bay, giving the more local Handsworth Royals fans serious cheering competition.

In addition to the silver medal, the Oak Bay team also won the BC AAA Field Hockey Fair Play Award. It was rare for a team in the final win this award but it was a credit to the team and their coaching staff for how they represented themselves on the field. The Fair Play Award is selected by the umpires through voting after each game. Teams are evaluated not only on their interactions with opponents and umpires, but also in how the team behaves and interacts with each other, including coach behaviour.

“We are beyond proud of this team,” said head coach Meena Sran. “It is a huge feat to make the finals two years ago, with such massive change on the team from last season to this season.”

The Oak Bay team started the season with seven returning players, but most playing different positions than last season. New coaches, Sran and Heather Benson, manager Carla Unger, and nine new faces including five international students. One week after school started, and after only two practices, the team finished second at the Friendship Cup. They went on to win the John Ferreira tournament shortly after, and Island Championships with a victory over Cowichan Secondary in a very competitive game.

At the BC AAA Championship, a very solid performance from a young Cowichan Secondary team also represented Vancouver Island. They upset the 4th seed, Churchill, in pool play to top Pool D. A tough shoot out loss in their quarter final to Heritage Woods meant an ‘all Island’ final was no longer possible. They had a very tight game against Kelowna for fifth place, losing 1-0. Coaches Ashton Aumen, Caitlin Erickson, Perri Espeseth and manager, Karen Birch, are to be congratulated on their teams competitive play and improvement throughout the season.

Congratulations to all the players and coaches for their performance and for representing Vancouver Island so well.