Over $1000 raised in honour of Pat Hall's contributions 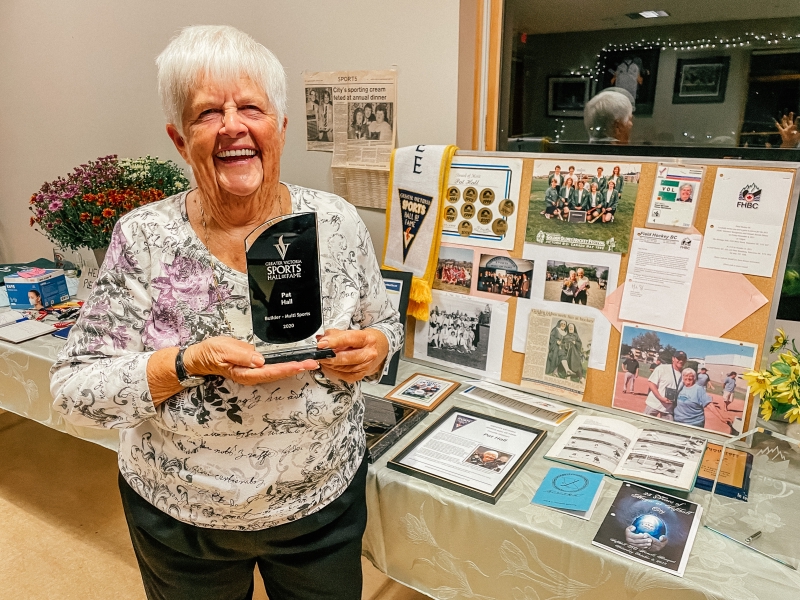 Last night, Sept. 17, a small group of the Vancouver Island field hockey community gathered to have a belated celebration of Pat Hall’s 2020 induction into the Greater Victoria Sports Hall of Fame.

The evening featured an impressive display of articles, photos and memorabilia spanning Pat’s involvement in field hockey. Long time friend Shelley Andrews, who was coached by Hall at Oak Bay High, emceed the event in entertaining fashion, while an impromptu open mic followed. Kind words followed from former VILFHA president Denise McGeachy, current Umpires Association President Alison Sweeten, as well as remarks from Anne Batey, Denise Hall and players who have been coached by or played with Pat. It was truly a community evening with representation from all current clubs as well as past members including Craig Wilson, Liz Munn and Ev Sigalet.

VILFHA hosted the event so that all donations and ticket contributions could support the FHBC Pat Hall Officials Development Award. This award is designed to promote the development of Vancouver Island umpires and technical officials. An award of up to $500 will be allocated each year to successful applicants. In order to be eligible for this award, applicants must be a member in good standing with Field Hockey BC and an active official within National, Provincial or Club based programming.

The award was created by VILFHA when Pat retired from a long, long-standing term on the executive.

VILFHA is pleased to announce that $1,160 was raised last night.

Thank you to everyone who contributed in congratulations to Pat!

See photos from the event last night on Facebook at: https://www.facebook.com/vancouverislandladiesfieldhockey